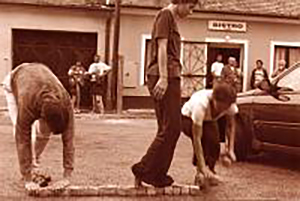 The know-how of KulturAXE results from the experience derived from effected cultural work in Austria and the nations of Middle and Eastern Europe since 1989. KulturAXE has since then realized a large number of transnational cooperation projects in the fields of fine arts, new media and architecture.

In addition to the ongoing and planned projects, KulturAXE has official invitations on institutional and political levels to further develop its activities in Slovakia, Hungary, Poland and Istria.

Through these project related trust building processes, an international network could be established on artist, institutional and political levels in Middle and Eastern Europe as well as in non-European nations.

KulturAXE stands in continuous formal and informal exchange with the established relations and disposes over a network of cultural “multipliers” in the partner nations. As a result of many years of effected cooperations KulturAXE has a profound knowledge of the challenges and chances of the Middle-Eastern European cultural area.

Furthermore, KulturAXE has a longstanding and sound experience in the promotion of art and culture projects, with a focus on crosscultural approaches on a worldwide level. As such, KulturAXE views itself as a turntable and transcultural interface with a focus on Middle and Eastern European cooperation processes.